Because of the death of Twitter, it looks like it’ll be a self-driving platform, just as this Tweet suggests. It’s a hilarious parody of the Tesla. It’s a shame this is happening, but in all honesty, Musk did it to himself. With all his new rules and everything on Elon Musk’s Twitter and everything he’s imposing on the platform, it comes as no surprise that it’s completely failing. Elon Musk might even figure out how to run Twitter using a bunch of bots. It wouldn’t surprise us it wouldn’t be as shocking as we think it would. Maybe he knew this was going to happen all along and has something hidden beneath his sleeve (via Twitter).

Everyone remembers Club Penguin. You probably played a game or ten. One of the best parts about Club Penguin was the chance to talk to strangers from around the world. Even though that sounds weird, it was completely accepted back then. For some reason, everyone played it and some penguins even developed a strange relationship with each other. You might’ve been one of these people. Anyway, this person’s meme hilariously depicts the downfall of Twitter by relating it to Club Penguin. It says, “the connection has been lost. Thank you for playing Club Penguin. Waddle on!” Replace Club Penguin with Twitter, and you have the same situation. It’s true what they say, RIP Twitter (via Twitter).

That’s what’s funny, according to this Twitter user. Elon is one of the richest people in the world, but we already knew that. All he wants is for people to think he’s funny and know him for being funny, in addition to being rich. Do those two things go hand in hand? What’s funny is that he tries to convince people he’s funny by spending money. But it has the complete opposite effect since you can’t trick people into thinking you’re funny when you’re just not. He’s one of the worst people ever, and we can see it from this list (via Twitter).

Elon Musk is trying to implement a rule where people have to pay for Twitter. He tried to be funny and create a meme about it, but in all honesty, it backfired. The meme isn’t funny at all, especially because of how many people are angered that Musk is making them pay for Twitter. Twitter is a free platform and a place for people to express themselves, connect, network, and hear about what’s going on in the world. He tried to make fun of the angry people by showing how ridiculous it people spend $8 on a drink from Starbucks that’s gone in 30 minutes, and complain about spending $8 on Twitter, something that’ll last 30 days. It’s not funny at all. Twitter is supposed to be free and it should stay that way. No one wants Musk to go in and start changing everything around. Look what happened when he started doing that. Elon Musk’s Twitter sounds like a scam (via Twitter).

It’s true what they say, when someone dies, their brain activity surges. This person called out Elon Musk’s brain surge with the death of Twitter. He Tweeted that “we just hit another all-time high with Twitter usage.” Even though that might be true, it’s probably the surge before death, just as human brains do. It’s a hilarious, accurate Tweet that probably hit a little too close to home. At least Musk is living his life up until the very end of the platform and enjoying his last days on a high (via Twitter).

After Musk claimed that comedy is legal on his Twitter, he implemented all these ridiculous rules that everyone has to follow. It sounds more like no humor is allowed. These hilarious Tweets, which incorporate the famous Spongebob shot “two hours later” shows the downfall of Elon Musk’s Twitter. They created a scenario where someone Tweeted, “my wife left me,” but because they didn’t claim it was a joke, Musk suspended their account. This just goes to show you how angry people are at Musk’s sudden rules and how unnecessary they are (via Twitter).

Elon Musk sounds like someone who doesn’t fit in with the crowd, and who keeps trying to impress everyone around him by doing things that don’t fit his character. In a way, we feel bad for him. But we feel worse for Twitter. The platform is imploding, all because its owner is a social wannabe. Based on this short Tweet, his social calendar sounds all over the place and not like someone we’d want to spend time with. That’s why it’s better to watch his actions from afar, even if the entire world is slowly burning around him (via Twitter).

This hilarious meme depicts it all. Not only is the house cocooned in flames, but it depicts a hilarious internet character making a face we’ve all seen before. The bluebird from Twitter hovers above the fire, symbolically showing us that Twitter is burning to the ground. This Tweet is certainly accurate, it has been a good run with Twitter, even if it completely failed and crumbled before our eyes, in a mere matter of weeks. Poor Twitter. It never even got a chance (via Twitter).

This one is eerily relatable to every parent and every student in debt around the world. Everyone knows about payment plans, whether that’s for school or a house. The hilarious part about this Tweet is that it’s poking fun at real-life scenarios that aren’t funny at all. He asks if Elon Musk pays the $44 billion upfront, or if he plans to pay in installment plans. We wonder that, too. Imagine being able to pay $44 billion for a social media platform upfront. That’s the goal, except if it ends up miserably failing as it did for Elon Musk (via Let’s Eat Cake)

The best part about this meme is the kid’s face. Many of us have been that nerdy kid sitting behind a computer for hours on end, playing video games, and avoiding social interactions. The way this meme is phrased makes Musk sound like a fool. Musk paid $44 billion for the platform when this kid got it for free. This kid is a scammer with skills that’ll give him access to encrypted sites around the world of the internet, people’s personal information, and apparently, platforms that cost billions of dollars (via Let’s Eat Cake) 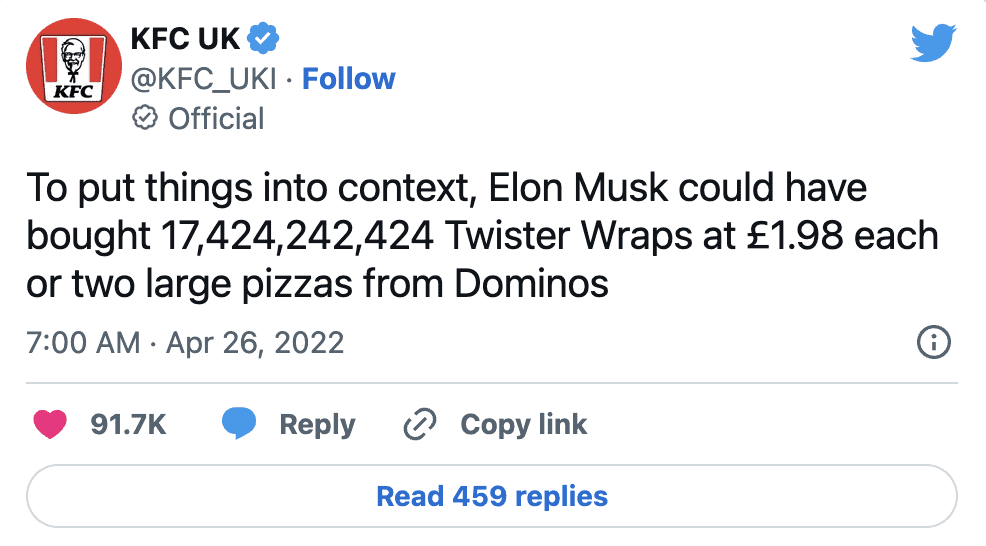 We love the comparison. Elon Musk gets thrown under the bus, again. Not only that, but they’re spelling out the horrible ending of Twitter in front of our eyes. The future for Twitter seems bleak, and there’s nothing we can do about it. It’s like watching a bridge burn but having no way of stopping the fire or putting it out. We quickly learn that Musk could’ve bought trillions of Twister Wraps instead of buying Twitter. Honestly, that sounds like a better deal. Imagine swimming in trillions of Twister Wraps. That sounds like a dream that most of us will never achieve, and it sounds a lot easier to handle than owning Twitter. At least we get to see this hilarious, different perspective from KFC and appreciate their math efforts (via Let’s Eat Cake). 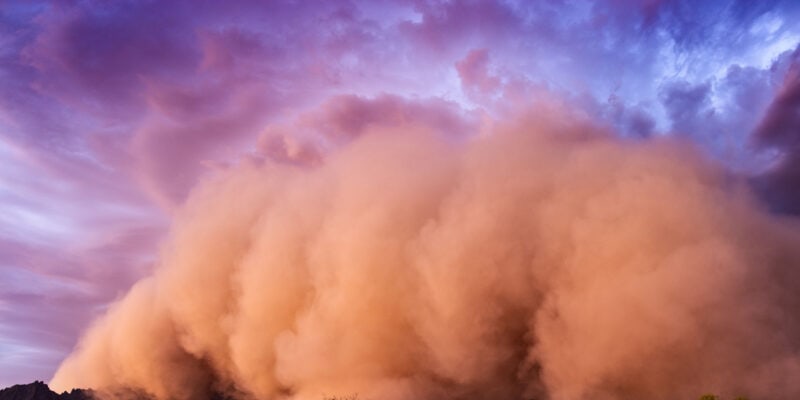